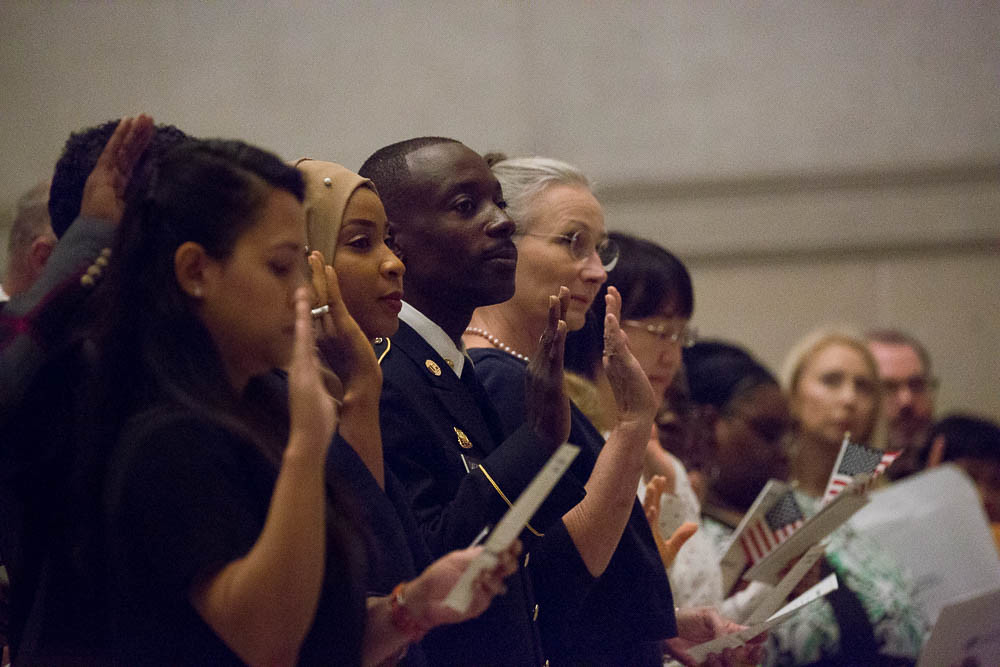 Last summer, the Patrick Heath Public Library hosted the exhibit “The Newest Americans,” featuring photographs and interviews of individuals from around the world, captured just moments before and after the ceremonies where they became naturalized US citizens. The exhibit was striking — the new citizens’ reflections were thought-provoking, and the grace, determination, gratitude, and hope in their faces positively beamed through Sam Comen’s photographs.

Naturalization — the process by which we welcome immigrants into the full rights and responsibilities of US citizenship — is not just beneficial for the citizens and their families; it is good for our communities and for our nation. The decision to become a citizen, and the determination to meet the requirements of citizenship, show a commitment to the United States, its principles, and its Constitution.

Studies have shown the value that naturalized citizens add to our society. Kerwin and Warren’s “Putting Americans First” (2019) found that “the integration, success, and contributions of immigrants increase as they advance toward naturalization, and that naturalized citizens match or exceed the native-born by metrics such as a college education, self-employment, average personal income, and homeownership.” Pastor and Scoggins’ Citizen Gain (2012) showed that naturalized citizens’ income increased 5-7% in the first two years after naturalization, and 10-13.5% a decade later. This income, of course, translates into consumer spending and economic growth; Pastor and Scoggins found that if even half of those eligible for citizenship became naturalized, it could add $21 billion to $45 billion to the US economy over 10 years. That is good for all of us — foreign-born or native-born.

Among other reasons, Canada does far more to encourage naturalization. In 2010-11, the Canadian federal government spent about $1600 per person on settling newcomers and helping them learn English/French. In the US, the figure that same year was $2.23 per person. Our priorities are evident in our economic choices. In 2011, the US Congress budgeted $15.3 billion to remove and keep out undocumented migrants, but just $18 million to promote English instruction, citizenship, and social integration. The ratio between what we spend on border control and removal of undocumented people, and what we spend on helping legal immigrants to naturalization, is nearly a thousand to one.

And in 2020, the barriers to naturalization are becoming even more arduous. The fee to apply for naturalization, which was $95 in 1996 and is currently $680, will increase in a few months to $1,170. Fee waivers previously available to applicants with economic need are being discontinued. Yet as the New York Times reported last year, the average time for processing of naturalization applications doubled between 2017 and 2019, and as the Houston Chronicle recently found, that delay has continued to worsen in Texas, where 80,000 naturalization applications were pending as of June 2019.

Time is of the essence

That means that if you, or someone you know, is eligible and considering becoming a naturalized citizen, the time to do it is now. Two free workshops will be offered next month in San Antonio to assist with naturalization questions and applications. They will take place February 1 at the YWCA at 503 Castroville Rd, and again on February 29 at the South San ISD district office, 5622 Ray Ellison Blvd. Some local organizations in Kendall County, including our public libraries, offer help and materials for those studying civics and English to fulfill citizenship requirements. You can find more information at kcdems.us/citizenship2020.

To all those in our community who have made the decision to become naturalized, we admire your choice and are glad to call you our fellow citizens. To those who are considering it, we can’t wait to welcome you to the family soon.